> All Blog News > The Magic of stones

The Magic of stones 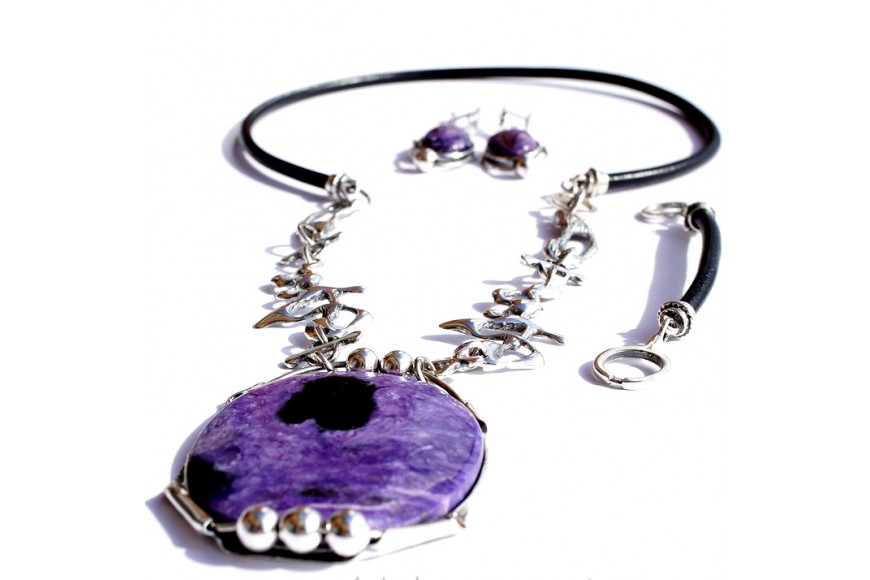 Rhinestone is a large crystal of quartz composed of silica. Rhinestone is a colorless, absolutely clear mineral. Rhinestone crystals are usually in the shape of hexagonal prisms, very hard. The name comes from the Greek "crystal" - ice. Rhinestone is not only clear and pure, but also cold. Holding the glass and the rhinestone in our hands, we can feel which stone is the one. The glass heats up quickly and the rhinestone stays cool longer. We will feel a cold pleasant tingling in the cheek. This is how we can distinguish between crystal counterfeits.

The extraordinary clarity of the crystal, the high hardness, the perfect crystal shape, and the ability to polish in all the colors of the rainbow have dominated mankind since ancient times. Rhinestone has already been used by Mesolithic people. Rhinestone was also known in ancient Rome and Greece. In ancient Roman times, it entered the market from the Alps and was called "fossilized ice." Roman aristocrats loved to carry rhinestones cooling hands. Japanese embroiderers cooled their hands with rhinestone beads to keep sweat from staining expensive embroidery. Eastern nations considered the rhinestone a stone of patience and perfection. The Tibetans healed wounds with it. Circles were polished from rhinestone for magic purposes. They treat abdominal and heart pain. And a drink from a crystal cup protected against toothache. Rhinestone held in the mouth suppresses thirst. Buddhists considered it one of the seven gems. The Arab traveler and scientist Al Birunius wrote that rhinestone is the most valuable of all gemstones suitable for the manufacture of utensils. Its value is characterized by transparency and similarity to the two beginnings of life - air and water, it is characterized by gentleness of air and purity of water.

The name Charoit originated from the river Chiara in the Republic of Yakutia, Siberia, where it is the only site of this mineral. Belongs to the category of gemstones, the class of silicates, it is a rare stone.

Charoit has a strong cleansing effect on the body's energy, dispels bad memories, at the same time strengthens the spirit, illuminates new goals of life.

For healing, Charoit is considered a powerful stone that strengthens, energizes, cleanses, and prepares the person for energy and power.

In ancient India, Amethyst was called CACUNDA in Sanskrit. The Sumerians (3000 BC) were also interested in this gemstone, as evidenced by the records they left on clay tablets; they state that amethyst is "a talisman that gives love to the giver, even if the woman has previously felt love for a completely different person." Sumerians call amethyst a stone of disbelief, infidelity, because it will replace the old love with indifference, and open the heart to the new one. Therefore, amethyst should be avoided in engaged and married women.

In the ancient Greek language, amethysts mean "non-intoxicating", with their magical powers do not allow intoxication from alcohol, protect against drug addiction.

Already in ancient times it was believed that it has special powers that determine success, stability of life, protect against spells, diseases, drunkenness and bad thoughts, smooth out small wrinkles, eliminate freckles, cure gout. For infertile women, this stone helped bring about the joy of motherhood. If you have secret, "black" sinful, angry thoughts, amethyst will help you get rid of all the abomination of the soul. Amethyst provides peace of mind, especially when suffering from stress, depression, unexplained sadness or fear.

Astrologers also recognize the strong influence of the amethyst amulet, which is especially suitable for those born in the sign of Sagittarius, as it can help in hunting, competition, love and even work.

A romantic legend about Amethyst is told by the Greek philosopher and scientist Aristotle, a pupil of Alexander the Great. Lived in a very amazing and modest forest nymph Amethyst. The god of wine and merriment, Dionysus, saw the beauty and was ignited by an unquenchable wild passion. But the beauty was not at all admired by the eternal fan, because she always loved the sober musician, who gently played the flute, the shepherd Sirikos. Outraged and angry, Dionysus was angry that she dared to reject the god himself, he rushed to chase the meadows and forests, and was already grabbing her by the hands. But the frightened Amethyst turned to the goddess of hunting Artemis for help, who turned her into a gemstone amethyst reminiscent of purple forest pots. Embarrassed and confused, Dionysus gave this gemstone the power to quell low passions and protect him from drunkenness.

If you choose this stone intuitively, it is time to change and take a new path.

Onyx is one of the twelve gemstones that adorned, and perhaps guarded, the bust shield of the biblical priest of the government, the efudo. The onyx is a fibrous variety of chalcedony quartz. In ancient times, onyx was referred to as all-striped chalcedony or quartz, later black chalcedony. The most valuable onyx is with white and black overlays. Onyxes with brown, black, and white overlays occur. Strengthens regeneration, instincts, a sense of happiness, rescues from insomnia, helps to get rid of bad habits, strengthens self-control and reduces stress, relieves various pains, strengthens the immune system, hearing.
In addition, onyx will help get rid of gloomy, black thoughts; clear thoughts. It is a strong protective stone that provides a mascot of psychological stability, balance, joy, happiness and establishment. It will help you overcome bad habits, control your emotions, inspire creativity, help get rid of laziness, chronic fatigue and longing. Helps people who are easily influenced by others develop healthy self-confidence and fight for their ideas and beliefs. It promotes logical, analytical thinking and a sense of reality. Good - for stubborn, scrupulous, goal-oriented and confident, but at the same time creative or playful people.
Onyx concentrates a huge force, energy. It is a stone of longevity. It was once called the "leader's stone" because it gives power, greatness, power, sharpens the mind, and helps to guess the plans of enemies. Excellent protection against negative energy, from sudden death, attack on the life of the host, from mental and physical attacks and curses. Balances male and female energies, helps control passions and emotions, can be used to suppress sexual desires. It is advisable to test this property of onyx - keep it in the water ready for bathing for some time before going for a swim. After bathing you will feel special peace, relaxation and a sense of security.
Giving away to a loved one can set you apart. It is risky when a man gives his wife this stone, then gives her the opportunity to "play the first violin". In summary, it is risky to donate this stone because it exacerbates interpersonal relationships or gives the recipient unlimited power.

Onyx translated from Greek means nails. According to legend, the sleeping Venus Cupid cut his nails, and since the divine thing could not break through, those cut nails turned into onyx. In ancient times it was called the "leader's stone", which increases mental abilities.
Strengthens determination, endurance, helps to survive difficult periods. Helps people who are easily influenced by others develop healthy self-confidence and fight for their ideas and beliefs. Helps to survive the loss of love, as well as other old attachments. It promotes logical, analytical thinking and a sense of reality, helping to become the family of one’s destiny. Strengthens regeneration, instincts, a sense of happiness, helps to overcome bad habits. Saves from insomnia, relieves various pains, strengthens the immune system, hearing. It treats skin conditions and improves its condition, it is also related to bones, bone marrow and teeth.